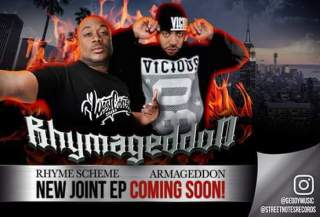 Due to the success of the 2015 viral hit single “Progression” by Rhyme Scheme featuring Armageddon of the late Big Pun’s Terror Squad and indie hip hop Detroit star Revolver. Rhyme Scheme and “Geddy” (Armageddon) have decided to team up yet again to duplicate the success of the past single, this time by working on and releasing a full joint project together titled RHYMAGEDDON slated for a May 2017 release.

Get familiar with rising indie hip hop recording artist RHYME SCHEME! Rhyme Scheme is originally from Detroit, MI and moved out to Los Angeles, California to pursue his career in entertainment. Rhyme Scheme has built a major name for himself while being stationed on the West Coast, and has collaborated on songs with some of the heaviest hitters in the game such as Keith Murray of Def Squad, Yukmouth ofThe Luniz, Tupac Shakur’s brother Mopreme, Young Noble of 2Pac’sOutlawz, the legendary Spice 1, Bad Azz and Kurupt of Da Dogg Pound Gangstaz, and the list goes on and on. He’s even shared the stage with artists such as Domino, former No Limit artistYoung Bleed, Jayo Felony and more!

The joint project will also feature other members of the Terror Squad such as Prospect and Tony Sunshine, as well other powerhouse recording artists like Detroit, MI legend Big Herk (known for collaborating with Trick Trick and Obie Trice before signing with Shady / Aftermath). Production on the album will be entirely provided by Ohgosh Beats!

50cent 520promo 2016 2018 A Ain't All AND Baby Bag Big black Boi business by da Don Dope FEAT FEATURE featured Fongsaiu For FREESTYLE ft Game General GET GO Got gunit hard HOSTED I'm In It Jay KING LIFE like Lil Lost ME MIXTAPE money music My new Next No Of OG on Out PRESENTED RAP Remix Santana SAUCE spotify support TALK That the To trap Unsigned Up VIDEO WALKA What Who you young YUNG
%d bloggers like this: