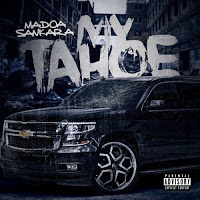 Madoa is an American emcee and one half of the hip-hop group The Drop Squad. Madoa, raised in Newport News, VA, resides in Raleigh, NC. After forming The Drop Squad in the late 2000s, Madoa and Botti released their critically acclaimed mixtape, The Drop, in 2010. The debut project was well received – praised for its stellar production and diverse subject matter. After a brief hiatus following The Drop, Madoa released the single “City Lights (Raleigh Tribute)” off his upcoming solo project Witt. Featured on multiple blogs, “City Lights” became an instant classic described by Bloggerhouse.net as “a track that could be one of my favorites of the year” and “one of the reasons I still keep blogging.” “My Tahoe” is the second single off Madoa’s debut mixtape, Witt, which has a release date scheduled later this year.

50cent 520promo 2016 2018 A Ain't All AND Baby Bag Big black Boi business by da Don Dope FEAT FEATURE featured Fongsaiu For FREESTYLE ft Game General GET GO Got gunit hard HOSTED I'm In It Jay KING LIFE like Lil Lost ME MIXTAPE money music My new Next No Of OG on Out PRESENTED RAP Remix Santana SAUCE spotify support TALK That the To trap Unsigned Up VIDEO WALKA What Who you young YUNG
%d bloggers like this: